It’s a Wednesday afternoon, and I pull open the door and smell the gym—the chalk, someone's coffee, the rubbery stink of climbing shoes. The staff members—as always—greet me by name as I drop my climbing bag in the corner, which is already stacked with the bright orange team bags belonging to my friends. Shoes and chalk in my hands, I enter the bouldering area to warm up. This place is like a second home to me. It's where I learned how to lose without losing my confidence; it's where I've won competitions and won the respect of my coaches; it's where I learned to throw myself into something with my whole heart. It's where I've learned to climb like a girl.

It’s a Wednesday afternoon, and I pull open the door and smell the gym—the chalk, someone’s coffee, the rubbery stink of climbing shoes. The staff members—as always—greet me by name as I drop my climbing bag in the corner, which is already stacked with the bright orange team bags belonging to my friends. Shoes and chalk in my hands, I enter the bouldering area to warm up. This place is like a second home to me. It’s where I learned how to lose without losing my confidence; it’s where I’ve won competitions and won the respect of my coaches; it’s where I learned to throw myself into something with my whole heart. It’s where I’ve learned to climb like a girl.

1. LOOK AT EVERY “FIRST” AS A CHALLENGE

Climbing is something that took my life and turned it upside down—sometimes quite literally (yes, that’s me hanging like a bat). Before I found the gym, I was a competitive figure skater who didn’t like my sport. Before that, there was soccer. And karate. And horseback riding. Oh, and a very short stint at ballet. (I was really bad at ballet.) But nothing held me for long. Then, when I was 12 and climbing at the AZ on the Rocks summer camp, one of the staff members pulled my best friend and me aside to try out for the team. We both nailed the tryout, and within three months, I was a member of the AZR Ascenders. I worked my way up through the tiers of the team for two years, slowly gaining experience, technique, and friends. But looking back, I realize that, for me, climbing has been a series of “firsts.” Climbing like a girl has come to mean that I look at every “first” as a challenge. If I can’t do something right the first time I try, there’s no judgment and no shame, not from myself or from my peers. A “first” means

I’ve made a start; I’m on my way to learning another new thing; and that’s what’s important.

The first time I tried climbing, I was eight and a very average beginner. I climbed in my white tennis shoes. (Check out the picture.) I couldn’t quite figure out how to get my feet off the ground. I distinctly remember turning to my mom and asking, “You mean I have to hang from my hands?” as though it were an impossibility. Honestly, I didn’t like it much. The rental harness chafed my legs, the shoes were too tight, I didn’t like the smell of the gym, and I was too short to reach the holds—but the worst part was watching the other members of the gym swarm up the rocks like veritable spiders. After two hours, I was torn—I either never wanted to go back to that stinky place again, or I wanted to learn how to climb like those spider-people I had seen. How did those people climb up those walls like that, gripping only the tiniest ledges and moving with the grace of a tiger, while I was seemingly glued to the ground?

So I went back, for birthday parties, for the occasional Saturday afternoon, for camp. I thought that a week in the summer would be enough to learn how to scale walls, and I’d be done. After all, it looks easy. Once you have the secret (and I was convinced that there was one), you’ll be good at it, right? Well … I attended the camp that summer, and I did manage to get my feet off the ground. It took three more summers—I was 11—before I did my first real route (that is, following only holds marked with the same color, and not falling, and not sitting on the rope and taking a break). But camp taught me that even though the wall looked as illegible as a splatter painting, there was a structure and a strategy to climbing. It wasn’t just physical; it was profoundly mental.

When I was twelve, having climbed a 5.9, a relatively difficult route (well, difficult for me at the time), I was recruited for the team. During my first year, I realized that climbing well was going to take time, training, practice, and experience; and for the first time in my life, I was willing to put in the slow, steady work. Looking back, I realize that I’ve learned a valuable lesson about hard work paying off. Those people whom I used to look at jealously are now some of my closest and most trusted friends and teachers.

Flash forward a few months. I decided that it was time for me to get my first pair of climbing shoes, in preparation for the coming competition season. My mom and I took a trip to REI and headed straight for the climbing gear section. I was looking at the aggressive shoes—the Evolv Shamans, the 5.10 Blackwings, and other cool-looking options like those—until a sales representative came over and asked if I wanted help. Sure, I said. He asked me a few questions about how hard I climbed, how long I’d been climbing, and if this would be my first pair of shoes. As I answered, his eyebrows rose higher and higher. After a few minutes, he gently took the Blackwing box out of my hands, put it back on the shelf, and handed me a Sportiva box containing a pair of non-aggressive green lace-ups. “These are more suited to beginners—it’s best to start slow,” he said. I was extremely irritated by this. I’m not a beginner, I thought defensively. I’m on a team. I’m competitive. I climb V1 and 5.10-. I’m probably better than you! But my mom took my arm and thanked the man for his help, and I ended up in the gym an hour later with my brand new serpent-green shoes.

I was decently good at climbing for a twelve-year-old, but Blackwings, the advanced, down-turned, aggressive shoes that I had been holding, were what my friends who climbed V10 and 5.13 wore, not what V1 and 5.10- climbers should be wearing. If I’d bought those Blackwings, I would’ve been in a lot of unnecessary pain; the routes I was climbing didn’t require that degree of downturn. Besides, I now know that fellow climbers, especially my superiors, would have ridiculed me endlessly. If a newbie like me had made the bold move of buying Blackwings, I would have looked as though I were trying to appear better than I actually was, opening the door to be judged harshly by the people I had come to respect. The same rule went for buying a harness; a generic 5.10 harness bought from the gym would do the trick. I bought a manual-locking carabineer for belaying. It was the same one everybody had, functional and universal. I realized there was nothing wrong with climbing at the level where I was—and buying the shoes that fit not just my foot but how I was climbing.

A month later, my bright green shoes and I decided to take to the walls for my first competition. It was a generic USA Climbing competition, the kind that I do routinely these days. However, this one was a big deal to me at the time. I’d been progressing steadily and at that point climbed something like 5.10. I was very excited and convinced that, like the characters in my favorite sports books, I would be the dark horse, coming up from the bottom and stunning the crowd with my skills before proudly carrying home a gold trophy. (Ha!) The competition day arrived, I donned my tie-dyed team shirt and serpent shoes, my mom drove me to the gym, and I climbed my very best.

I took home a “competitor” ribbon and eighteenth place out of twenty-one twelve-year-old girls.

I was too shocked to be upset—this reality check had been completely, 100% unexpected. I’d thought I was good. I’d thought I had potential. I’d thought I deserved to be on the climbing team. These thoughts swirled through my brain for eighteen minutes, until I got another shock: Hannah Tolson, a girl on the top tier of the climbing team and one of my biggest idols, came over to me with a smile on her face and a first place ribbon tucked in her pocket and congratulated me. I mumbled some sort of thanks and then turned away, embarrassed.

Okay, so maybe I didn’t do too badly after all. I might not have been as strong as I’d thought I was, but at least now I recognized it. I had a place to begin. Something else I recognized is that I wanted to be the best. I wasn’t going to be satisfied with going in halfway and coming out with competitor ribbon. My first competition became my first disappointment in my climbing career; and that disappointment led me to my first yoga class and first weight-training session and first five-mile run and the beginning of my cross-training obsession, all of which helped me to my first podium, to my first qualification for a national competition (see photo), to my first V7, to my first lead climb (where I carry my rope up the wall, instead of top-roping), to my first outdoor climb, and to my first 5.12.

Climbing isn’t only about how much natural talent you have when you begin. It’s about how many “firsts” you’re willing to tackle, and with how much passion. Not one national champion would be where he or she is if she didn’t give absolutely everything she had in every competition. I don’t have crazy natural talent, if any; I could barely lift my feet off the ground when I started. But the reason I can do that now is that I set my mind to getting off the ground and pursued that goal with all of my being. 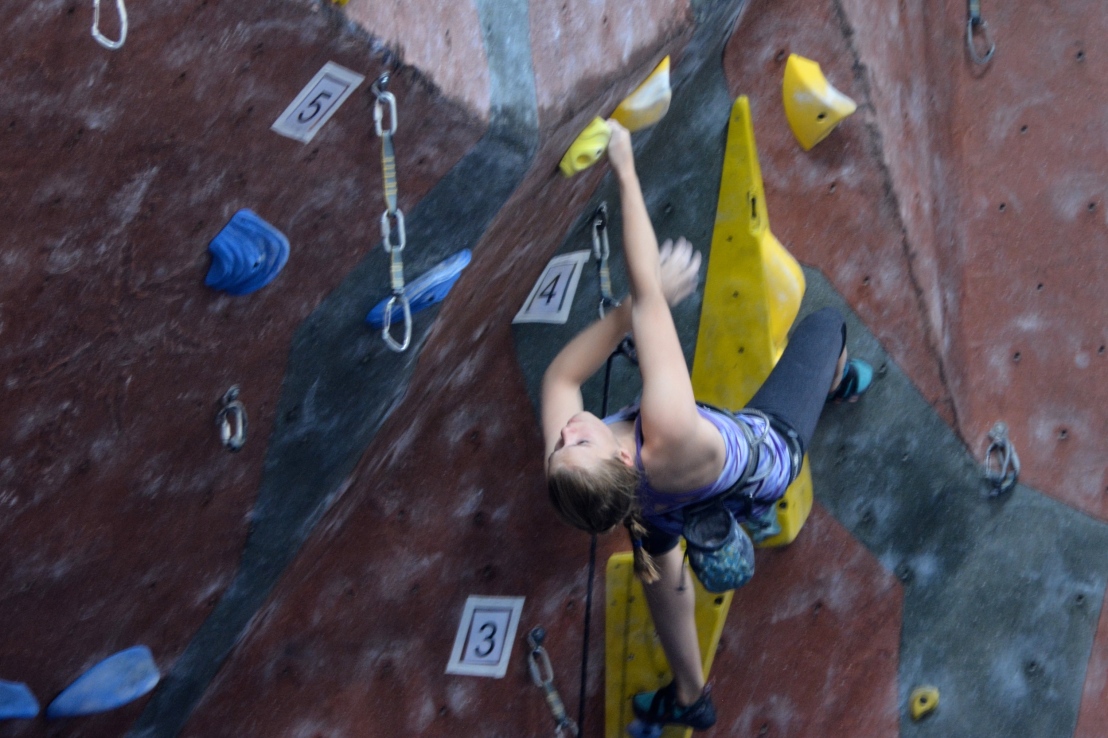 It means that you understand why someone would, say, skip a high-school prom to attend a competition (yes, I did) or turn down shopping at the mall with friends in favor of an endurance-training session. People ask me why I spend my life climbing the same walls on the same plastic holds in the same gym every day of my life, and I don’t really know how to answer that; to most non-climbers, simply saying “I love it,” isn’t enough of an answer. But it’s true. Maybe the plastic holds don’t “change” much; but the routes change, and I change.

So, the real reason I consider myself a climber? Climbing makes me strong, confident, happy, and healthy. It shapes me, and makes me stronger both physically and mentally. Because of it, I walk into the gym and out into the real world ready for my next “first.”